The Battle of the Greens!

Battle of the Greens 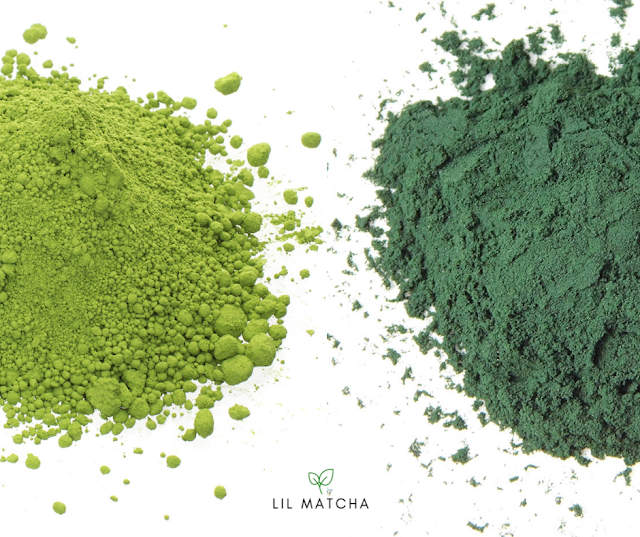 It seems like there’s a sparkly new superfood hitting the market every week at the moment.  Just when you’ve finally learned how to spell ‘quinoa’ and pronounce ‘baobab’, another magical powder or berry starts popping up all over Instagram and promises to flood you with antioxidants.

It can be hard to decide how best to nourish your body, but we happen to think that something as simple as pouring yourself a comforting cup of tea is a pretty nice way to start.

People often ask us how matcha stacks up when compared to other green powders out there, like spirulina. If you’re on the fence about which one to add to your repertoire, let us break it down for you and officially launch ‘The Battle of the Greens’!

Round One: The Taste Test

Let’s face it, no matter how good something is for you, you’re never going to eat it if it doesn’t taste good.

We looooove the smooth, creamy flavour of a Matcha Latte (especially if it’s made with our amazing ceremonial grade matcha powder).

Spirulina is more of an acquired taste and is often best enjoyed in a sweet smoothie, to mask its flavour. As Spirulina is an algae, its taste is often not so affectionately referred to as ‘pond scum’. While we wouldn’t be so harsh as to call it this ourselves, we’d still take some raw matcha treats over a scoop of spirulina any day.

Matcha and Spirulina both have amazing nutrient and antioxidant profiles, further proof that Mother nature really is amazing!

Matcha, for example, is rich in compounds called catechins – a class of powerful antioxidants. In fact, the number of catechins in Matcha tea is up to 137 times greater than your average cup of green tea.

Why are these antioxidants so important? Well, they help to stabilise harmful free radicals in the body, that can otherwise damage cells and lead to chronic disease. Not bad for the humble cup of tea …

Spirulina is abundant in protein, essential B vitamins, and dietary minerals such as iron. Although it doesn’t contain the same antioxidants as Matcha, it does contain another type called phycocyanin – a powerful anti-inflammatory. 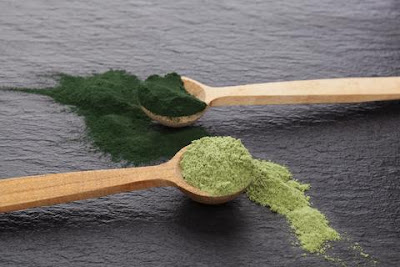 While Matcha has been consumed in Japan for centuries – a nation which is famed for its healthy people and impressively long life expectancies – the practice of consuming spirulina and other greens powders as we know them today is relatively new.

Although it’s thought that spirulina was consumed by some ancient cultures, there’s no evidence to show that it was eaten in recent centuries. The first large scale production of spirulina (as we know it, in modern times) began in the 1970s.

The problem is – our planet is a little dirtier now than it was when ancient Aztecs enjoyed this ‘superfood’, and spirulina can be compromised if it’s harvested from polluted areas, or if it comes into contact with other types of algae.

Dr Michael Greger, founder of nutritionfacts.org and bestselling author of ‘How Not to Die’, has written extensively about the brain and liver toxins that have been found in samples of spirulina, and their potential effects on the body.

The U.S. National Institutes of Health describes spirulina supplements as "possibly safe", provided they are free of microcystin contamination, but "likely unsafe" (especially for children) if contaminated. Because of inadequate regulations, there are concerns that we can never be sure that spirulina is free of contamination.

We don’t say this to scare you – there’s no doubt that spirulina does some amazing things, but as with everything in life, it’s all about risk vs benefit.

When you’re choosing what to put into your body, it’s important to do your own research and make choices that are right for you. Greens powders are often amazing, but we happen to think matcha is just a little bit more magical than all the others.

What else could you turn into donuts, smoothie bowls, a 'healthy' affogato or a creamy, delicious iced latte?

Even Dr Greger enjoys whipping up a batch of Matcha ice cream. 😉

To grab yourself some of our amazing Lil Matcha, head over to our shop now. Happy drinking! 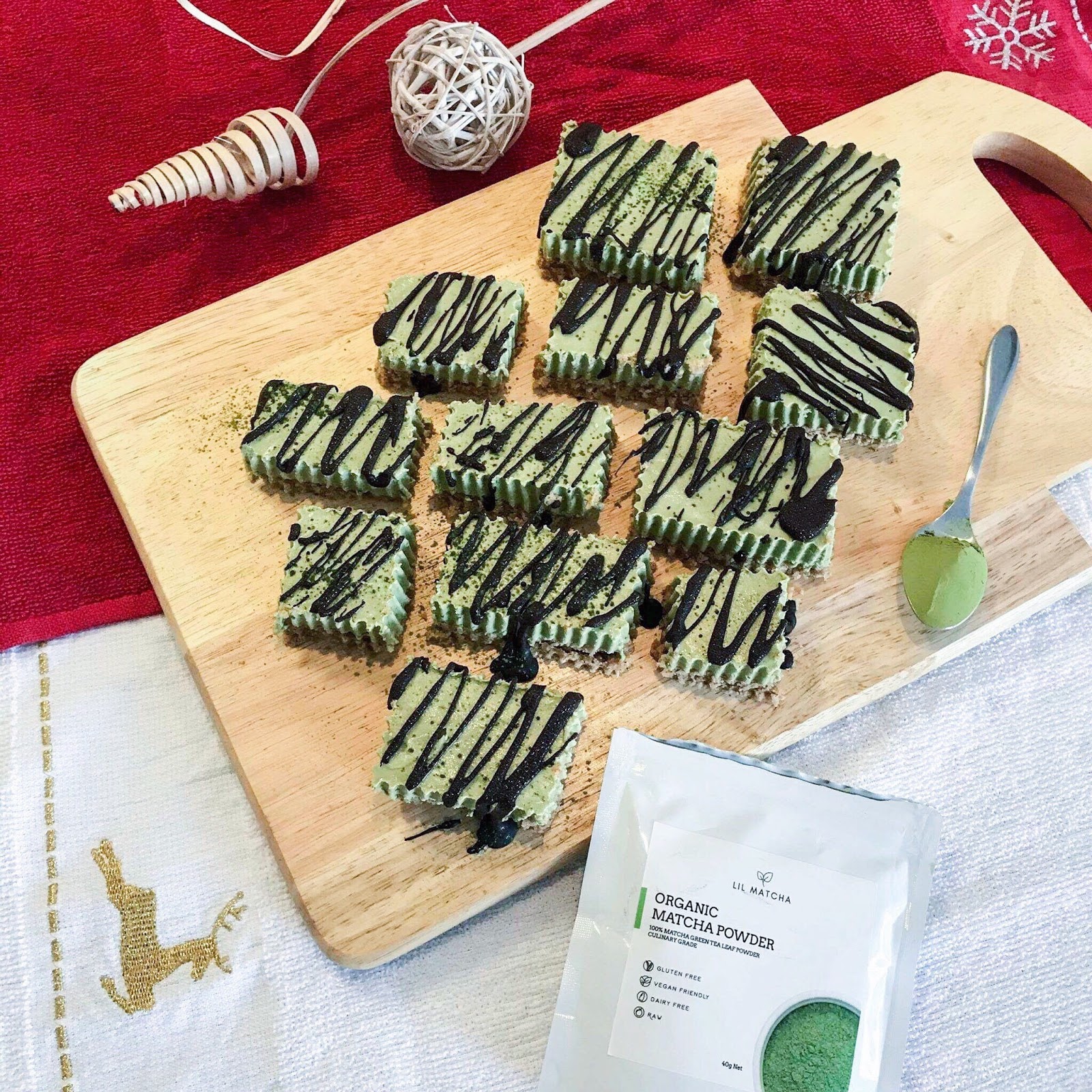 Raw Matcha Treats With the holidays/Christmas around the corner, we have whipped up a special recipe collaboration with the lovely Deswinne   (@ plantifulpenchant ) for some absolutely mouthwatering Raw Matcha Treats. Have a look at how easy these delicious treats are to make and maybe even try to make some of your own to enjoy some delicious treats with the whole family! Ingredients: Base layer: 1 cup almond meal  1.5 cup oat flour  1/8 tsp salt  3 tbsp smooth peanut butter  4 tbsp coconut oil  4 tbsp maple syrup Matcha layer: 2 cup cashew  1/2 cup + 3 tbsp coconut cream  1/2 cup maple syrup  3 tbsp coconut oil 4 tbsp hot water  4 tsp matcha powder   Chocolate : 4 tbsp cacao powder  4 tbsp maple syrup  4 tbsp coconut oil  Steps:  Soak cashews overnight or soak it for 1-2 hours in hot water  Use a spatula to combine all the ingredients in the base layer together ( alternatively, you can use your hands as I found that it was 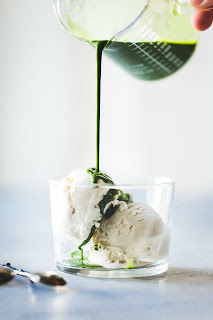 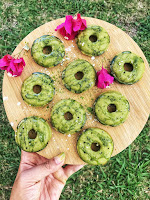 Mochi Matcha Donuts This week at  Lil’ Matcha, we collaborated with one of our favourite  instagramers, @mindfulofmatcha, who is a psychologist  in training and Matcha enthusiast. We  were drooling over all of the Matcha donuts from National Donut Day and simply couldn't resist her ‘Mochi Matcha Donuts’ and collaborated with her to share her delicious recipe with you all.  Ingredients Donuts:  2 Large Eggs 2/3 Cup of Milk  1/4 Cup of Honey  1 and 1/3 Cup Mochiko (Any sweet/glutinous rice flour can be used) 2 Tsp Baking Powder 3 Tbsp Melted Butter 1 Tbsp Matcha Powder Matcha Glaze:  1 Large Egg White 2 Cups of Powdered Sugar 2 Tsp of Matcha Powder,  1/4 Tsp Salt Dash of vanilla extract 1 Tbsp of water Directions Donuts: Preheat your oven to 350F/180C  Beat two eggs in a large mixing bowl  Add milk and continue to beat until just frothy  Stir in honey until combined  Add rice flour, baking powder and slowly mix  Pour the melted butter in whilst the dry and